When we got it (they? her?), Clara’s language was such that she called it We-vaan. The name stuck.

The last place I drove in Wevan was the farmer’s market on Saturday with H and my mom. A good last trip, though we had no indications of trouble. The next day the battery seemed dead, but (we found after two tows) actually the engine was somehow seized. Permanently seized. It is a mystery to everyone how we got here, but here is clear: while following traffic laws, our family does not fully fit in one car that is a small truck. There has been a death. We are noticeably – if not noticeably emotionally – bereft. Today I’ll arrange to donate the van to @pearmentor.

I’m writing about this because I’m curious about what this car meant to me; what cars mean to us, generally. I’m curious about how such a large loss – indicating such a significant privilege – seems to count as so little. I’m curious about my deep and lasting ambivalence around car culture and how that expresses itself in my body considering the many years I have spent in cars in the course of my lifetime. I’m especially interested in the shimmering, just-for-a-breath possibility of being in right relationship.

Right relationship does not depend on purity. It is not a measure of worthiness. It is not stagnant or formulaic. But I still believe it is possible. In any given moment I am a part of the unfolding. If I can hold a boundary, keep my commitments, honor potency, and recognize my smallness in place and time, letting connection and destruction both exist without needing to choose sides… If I can resource myself without stealing, and nurture without resentment – both kinds of suffering made of the illusion of separation… These sensations are guides toward a living reciprocity. Where better to lean into it than in the relationships I navigate every day? Here is my phone, my child, my car. Here is my bed, my morning coffee, my daily breath.

I write these words perched in a moment of freedom, in this space without. Here, I ask for rides, take the bus to the train, initiate fewer plans. Yes, our lives are pretty fucking stable that I am making this big of a deal out of a seized engine. Yes, we will buy another car, stepping deeper into debt to do it. What car we will buy next will be determined by our particular calculus of camping, kids, commute, Oregon-to-Idaho across the Blues, maximum out-of-pocket, minimum-gas-mileage, how-long-will-it-last factors. Identity bits will sneak in there too, ones I maybe can’t see, even still. The kids just want windows in the back that open, which means it won’t be a minivan.

For years I drove Wevan without ever loving it, though I loved where we went and who went, even when I was so sick of the process of loading, unloading, and cleaning up after two or four or six bouncy, distracted, laughing and bickering little bodies. The songs they made up from what they saw out the windows; the rising energetic pitch in the car as resilience waned; the squishy, slumped forms when they finally gave in. Long talks in person or phone; podcast cry-moments; just-the-right-song with just-the-right-sky moments. When I got a freeway commute last year, I started by feeling excited for this precious alone-time. Quickly, excitement turned to resignation: I join the drugged masses each day as, in some kind of solidarity, we parade, secured in our convenience machines, sucking on the straw of the black snake to more easily funnel our own sap into the engine of destruction.

Talking about a first date she went on recently, a friend cringingly mentioned how the guy, who she had fun with, picked her up in a sports car, flashy, with after-market adjustments. She didn’t want to be judgmental but … Like someone taking you to church, right on the first date? I suggested. She said yes, it was finding out about one of his Gods – and wondering if that religion is compatible with her own.

I didn’t pick out the van. I let Jeff decide what would make the most sense. I’ve never purchased a car without his push, is the full truth, and it was my first time at a used car dealership. I had a baby on my hip, and another holding my hand. I was grossed out and intimidated all at once. Our relationship – already pretty heteronormative – gets exponentially more so in proximity to anything with an engine.

Last year I was crossing a bridge in Wevan with the kids when I got passed at full speed and volume by a lifted truck on huge tires. In a brief fit of intolerant rage, I said, “Don’t you girls ever spend time with a man like that.” Zelda was on me instantly: “How do you know the person driving that car is a man?” Me: “I just know.”

A debate ensued that lasted weeks and birthed her Spring Science Fair project. She set up a rating system to quickly register the relative size of a car (1-10, small to large) and then the gender presentation of its driver on a 1-10 (female to male) scale. (She determined that having a beard, a plaid shirt, a large adam’s apple, big hands and a belly all at once was a 10.) Then she collected data while we drove for a week, and plotted it all on a graph to look for trends. Her results? Anyone can drive any car — except: she did not see anyone under a 6 for gender presentation driving a car over a 7 for size. One quadrant of her graph remained blank.

When we decided to be practical by replacing Wevan’s blown transmission last spring, I vowed to accept this partner-in-driving. To stop fantasizing about a conversion van with a carpeted ceiling. I stuck on the bumper stickers I’d saved and bought a few more. I planned a road trip with my kids, and revelled in the freedom of choosing that night’s camp from the vantage point of the camp we woke up in. At each sweet slick of wilderness, Wevan released our tent, stove, propane tank, and cooler, and each time we said goodbye she took them back in easily. This is what we’ve been doing together since long before this car (we did it all while I was growing up, too) but this summer I really worked to value the flexibility, ease, and low-profile style of my dust-colored mid-aughts seven passenger truckster. With half-dressed girls sleeping between swims and Brandi Carlile crooning her mystic’s lyrics just to me, I swooped smooth like a heavy hawk between canyon walls shaped by the rivers I followed, shedding lead, weed-seeds, and burned carbon as I went.

The van brought us to my family and my body’s home, winter, summer, spring, fall. It carried us to blueberry fields and beaches, to our favorite camp spots on the Clackamas. We loaded the Wedgewood stove I cook on into Wevan, hugging the seller and swearing we’d take such good care of her baby. In a daily way, Wevan was like a giant rolling purse, full of the material of my to-do list. It was the shortest line between two points. It was a guarantee that I would be able to pick up another kid if need be, or get that dresser someone just dragged out to the curb. It protected me from the exposure of the bus, the physical struggle of a bike. It kept me from needing anyone else. I often waved to my neighbors twice a day from the window of Wevan – in the driveway, and out again. It was the default.

Given all of this, I notice that I still very much resist the sense that the van – a car – was or is an important relationship in my life. Who writes a eulogy for their 2006 Ford Freestar? Just borrow some money, buy another car, get insurance and plates – move on. But my whole practice is to notice, with open eyes, ideally with patience, what is already here. As my teachers have whispered to me again and again through the years, “What we don’t see controls us.”

If I were the benevolent dictator (some would see this as a malevolent choice, of course) of this current drama on Turtle Island, the first thing I’d do is tax the hell out of oil. Then I’d see what new earth-drug the tycoons turned to, and tax the hell out of that too. I’d use all that money to pay people to grow and find food, and fix up old houses, and to teach and learn these things from each other. I’d also honor the treaties, including recognizing that all National and State parks and all BLM land would be better run by Native governments — but that’s a different eulogy.

I write this not to invite disagreement on the practical points of my fantasy/plan, but to express my dear wish that all manner of car and truck travel cease being associated in the American mind with convenience, autonomy, and family life. I mean, obviously this would be a rough transition. On par with no more coffee, or no more wine, or no more sugar for the kids. A small apocalypse.

My life would be just as affected as any other. My ancestors trekked across this land, always West, always hungry, always wanting more. I’ve kept it up. As a kid, I drove with my nuclear family on twice-annual ten-hour pilgrimages to my mother’s family and body-home. Now I do the same with my own children. We bounce like checkers on the board. Without car-life, what would I choose? As I often ask my students: where is the gray area between the white of everything-depends-on-a-car and the black of my power-mad apocalypse? Knowing I live in a time when car-life is both connection and destruction, what choices do I have that I am not seeing? Where am I unwillingly controlled by my own life?

Yesterday I went to the auto-shop to say goodbye. I left in Wevan: a homemade CD cover with my daughter’s face on it; several green plastic army men in yoga postures; leaves and dirt from many precious, precious places; candy wrappers, altoid tins; the sock that – sort-of – keeps the pop-down kid-view mirror from rattling; the jack; some dried fruit that may have once been fresh. I brought away with me: three rolls of exposed film; many collected rocks, most from the headwaters of the Salmon river; jumper cables and an ice scraper; several sticky library books; a Sawyer water-filter stick; various Chinese remedies.

Next to the van in the back of the locked lot, there was a car I was proud to have my lost-one temporarily interred with. The people who loved this thing were no strangers to complexity. They worshipped and they warned, in one. Among other creative and laborious expressions of Truth in Car Practice, this living vehicle displayed a modified shopping cart glued to the roof, in whose child-seat rode two devilishly painted baby dolls. I don’t know if that car drives still, but with the tires it had, I can’t imagine how. I bowed to both silent hulks as I left, headed back to a friend’s car, borrowed. As I turned the key in the ignition, just for a moment, I felt the life light up within. The locks of my cage doors clicked. I drove away. 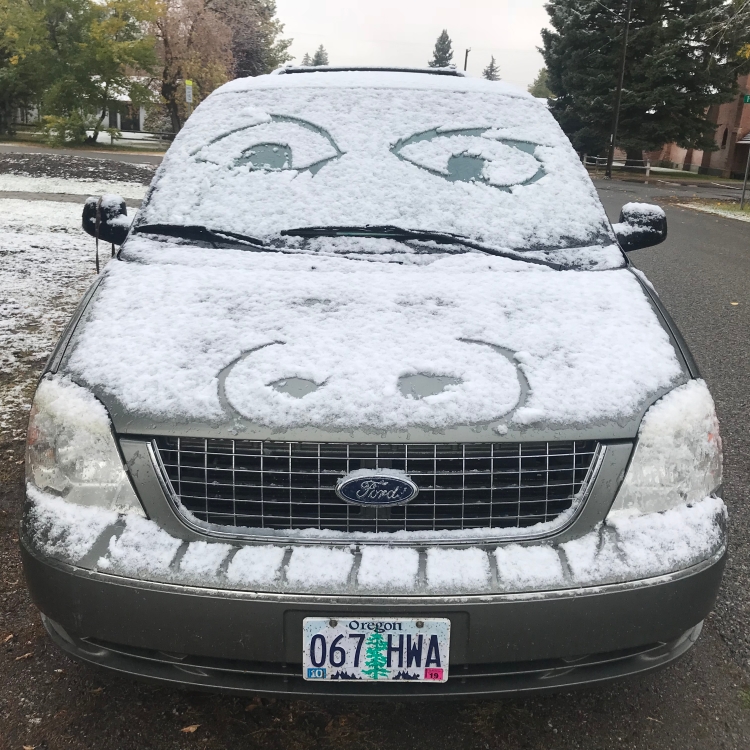